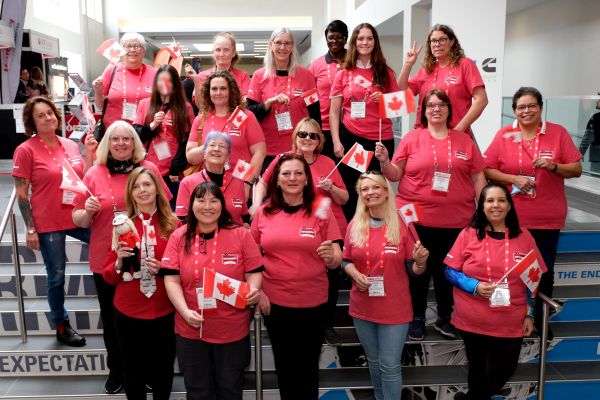 TORONTO, ON – Saturday afternoon at Truck World saw 21 women drivers gather for the sixth Canadian Salute to Women Behind Wheel – an event celebrating women who have chosen commercial driving as a career.

The Salute was organized by the Owner-Operator’s Business Association of Canada (OBAC) in partnership with Women In Trucking (WIT).

The drivers present this year represented a combined 350 years of driving experience. The group included four drivers with less than three years on the job and two women with more than 40 years of experience. The driving careers of several other participants spanned 20 years or more.

“These women bust the myth that a woman driving a truck is a relatively new phenomenon,” said Ritchie. “It also sends a strong message to other girls and women that driving can be a satisfying, stable career choice.”

There were two women present this year from the WIT Canadian Image Team, Susie De Ridder of Fredericton, NB and Barb Duncan of Alliston, ON. Image Team members give a public face to WIT’s mission, which is to encourage the employment of women in the trucking industry, promote their accomplishments, and minimize the obstacles they face.

Guest speaker Sarah Hilton, VP Development of LeadHERtrucking, offered the group insights into WIT’s mentoring program for new women drivers. While overall numbers of women behind the wheel remain below five percent, some companies are doing considerably better, said Hilton. She gave honorable mention to Skelton Truck Lines of Sharon, ON where women make up close to 50 percent of the driver population.

Hilton also noted that many fleets have high concentrations of women in senior management positions, including Kriska Transportation Group where 67 percent of senior leaders are women, and McConnell Transport of Woodstock, NB whose management team is 50 percent women.

A hallmark of the event is a group photo of all the women who hold commercial drivers’ licenses wearing the signature red Salute T-shirt. Ritchie called the display an attention-getting way to illustrate women’s presence in the male-dominated trucking industry.

“If we want to help women get excited about transportation as a career choice, we have to show them women out there working and succeeding in the industry, and dealing with the lingering perception that transportation jobs are for men,” said Ritchie, adding that the women being recognized will inspire and encourage ‘generation next’ to join the industry, demonstrating, by example, that women drivers can thrive and enjoy a career behind the wheel.

This year’s Carrier Award for Driver Participation, awarded to the carrier that has the greatest number of drivers at a Salute event, was awarded to Walmart Canada.

“There are hundreds of women drivers in Canada, but on the day of the Salute they are scattered all over North America doing their jobs,” Ritchie said. “A supportive carrier can make a huge difference. We hope the award will inspire carriers to encourage their drivers to participate, and to adjust schedules to accommodate those who are eager to take part.”

Organizers would like to give heartfelt thanks to this year’s Salute sponsors:

The salute was first established at the Mid-America Trucking Show in 2009. Canadian versions of the event have been hosted in Abbotsford, Moncton, and Toronto.